Is it possible that the future of illuminating urban areas at night may come, not from traditional electricity, but organic material 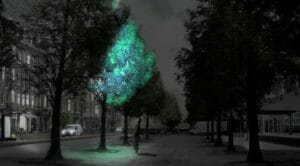 attached to trees that line the streets? The answer may be bioluminescent jellies and bacteria.

Dutch designer Daan Roosegaarde and his team at Studio Roosegaarde are interested in applying organic materials to the built environment that can produce light without electricity. More specifically, lighting the streets naturally with glowing trees.This lofty ambition led him to someone who’s been there, done that. Alexander Krichevsky of the State University of New York, Stony Brook, founder of tech company Bioglow, has already created small glowing plants through genetic modification.

Dr. Krichevsky does so by splicing DNA from luminescent marine bacteria with the chloroplast (which absorbs sunlight) of a houseplant. It’s the luciferase enzyme in Vibrio fischeri bacterium that is responsible for making the glowing plants, they have dubbed Starlight Avatar.

Ironically, direct sunlight damages rather than nourishes the Starlight Avatar plants. The plant lives for two to three months. So, unlike Roosegaarde’s vision, these would be indoor plants.

Calling it the world’s first light-emitting plant, Bioglow plans to auction the first batch off and is taking pre-orders on future plants that are currently being grown.

The notion of glowing plants has been around for a few years. In 2010, researchers at the University of Cambridge modified genetic material from fireflies and the luminescent marine bacterium Vibrio fischeri which led to what they termed as BioBrick that was inserted into a genome.

“We didn’t end up making bioluminescent trees, which was the inspiration for the project,” said research team member Theo Sanderson. “But we decided to make a set of parts that would allow future researchers to use bioluminescence more effectively.”

Yet another project is in the works, but this one does not rely on genetic modification. The Arup project involves a fine coating of “biological paint” that makes trees glow at night. Arup engineers envision a future where cities are set aglow by this biological dust.

There’s good news for people who worry about any large-scale dire consequences: The light-emitting pathway can’t be transferred by pollen to other plants. So, there is no reason to worry about intensely-lit forests for 24 hour days.

If you prefer to keep trees as nature intended, but still find the positive environmental impact of biological lighting to be too alluring to ignore, there is also a project in the works that would make streetlamps in this fashion.

Algae street lamps are being developed that store energy produced by photosynthesis during the day that generates light at night. The concept has a dual positive impact on the environment. It can cut down on the use of electricity, plus it absorbs CO2 in the process.