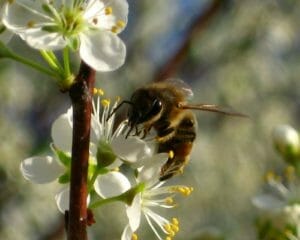 Last month, the Oregon Department of Agriculture (ODA) suspended the licence of an Oregon tree care company for allegedly using a chemical pesticide spray that killed about a thousand bees outside a Eugene apartment complex. The commercial pesticide service ignored or overlooked label instructions not to spray flowering trees.

The incident is one of several in Oregon that have involved pesticides. In Wilsonville, a landscaping company sprayed 44 linden trees in a Target parking lot in order to kill aphids, an insect that produces a sticky liquid that drips on cars or anyone walking under the trees. The ODA confirmed that the insecticide called Safari was to blame.

Just a day after the incident in Eugene, beekeepers in Estacada and Sandy reported the deaths of hundreds of thousands of bees on their property.

The plague of bee deaths was first reported to the state’s Agriculture Department by the Portland-based Xerces Society, a non-profit invertebrate conservation society. Their stance is that aphids can be controlled without insecticides.

With the current bee death crisis estimated at 50,000, there are causes other than pesticides, including mite infestation, fungal diseases and loss of habitat.

“There are several stresses that are stressing the immune system of the bee,” said Ramesh Sagili, a bee researcher at Oregon State University.

But pesticides are particularly worrisome, especially since they can be perpetuated by the average citizen with no understanding of the potential consequences.

The main ingredient in Safari, dinotefuran, is in a newer class of pesticides called neonicotinoids. Its nonlethal effects can compromise bees’ behavior, memory and homing ability. The bees can retrieve these chemicals along with the nectar in the plants, bring it back to the hive and infect the rest of the bees. According to Sagili, 121 different pesticides have been identified in bee hives across the country.

There’s a certain amount of mystery behind the recent mass deaths of bees and their colonies, the latter of which is referred to colony collapse disorder (CCD). But increasing evidence is showing that pesticides are playing a major role.

In 2012, researchers from the Harvard School of Public Health showed in two studies a strong connection between CCD and neonicotinoids. After the second study, lead author Alex Lu said in a release, “We demonstrated again in this study that neonicotinoids are highly likely to be responsible for triggering CCD in honey bee hives that were healthy prior to the arrival of winter.”

So, why are honey bees so important? Simply put, honey bees are responsible for pollinating one-third of the crops in the United States. Hence, if there were no more bees, the consequences would be devastating.

We’re not here to settle the debate over what’s causing the alarming rate of bee deaths, just to shine a light on the situation, and to demonstrate how responsible tree care professionals can most safely perform pest control. We also advocate organic pest control when possible.

First off, we don’t use any foliar sprays, which as the name suggests, is sprayed directly on the foliage. We do a basal bark spray and injections, and when necessary, a root drench.

The Environmental Protection Agency (EPA) does not allow for spraying trees while they are in bloom (which is what’s responsible for large scale bee deaths). Bloom isn’t always easy to detect, and differs from species to species and weather conditions.

While landscaping companies get the vast majority of press, individual homeowners are likely responsible for killing the most bees. Since the jury’s still out on how certain applications might be affecting bees, it’s important to hire a professional who can use the lowest dose possible and provide a variety of application methods best suited for your circumstances.