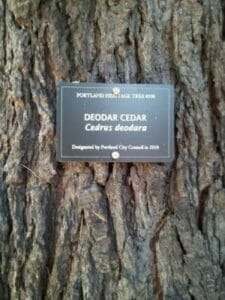 If there is anything that Portland and the rest of the Northwest is known for besides the wet weather, it’s the product of that weather: the lush green growth of our environment.

Trees are important to Portlanders, and it shows. According to Portland Parks and Recreation Urban Forestry there are 236,000 street trees and 1.2 million park trees in Portland, not to mention the uncounted trees on private property. Some of those trees have been given special significance.

On May 19, 1993, The Heritage Tree ordinance was added to the city code. This established that, on an annual basis, a list of trees is prepared that are given special significance due to their age, size, type, historical association, or horticultural value. They are then identified with a plaque, most of which are in Southeast Portland.

There are over 300 heritage trees in Portland, including 120 species. A little over half of them are on private property, but those can only be designated as Heritage Trees with the consent of the property owner. However, once the property owner consents, that lawfully binds all future owners of the property, making it unlawful for anyone to “remove, destroy, cut, prune, break or injure” the tree without obtaining a permit.

Here are the very first and last trees to be designated as Heritage Trees:

American elm (Ulmus Americana) – The first tree designated as a heritage tree was an American elm at 1111 SW 10th Ave. Dubbed “The Burrell Elm,” the tree was planted by Martin S. Burrell at the family estate in 1870.

Interestingly though, the American elm is more widely found east of the Rocky Mountains. This deciduous tree (those that lose their leaves seasonally) can withstand rough winter weather, and while this particular tree stands at about 78 feet tall, they are known to exceed 100 feet.

As longs as these trees remain unaffected by Dutch elm disease, they can live for several hundred years. This specific American Elm was planted in 1870. It is 78 feet tall and its canopy spreads 105 feet wide.

Japanese larch (Larix kaempfer) – The last to be given the Heritage Tree designation is a Japanese larch at 4626 NE 37th Ave. At 40 feet tall and with a 40-foot spread, this native of the mountains of Chūbu and Kantō regions in central Honshū, Japan, the country’s largest most populous island. It is one of the five deciduous genera among the cone-bearing trees (conifers).

Do you know of a tree you think deserves to be recognized and protected as a Heritage Tree? Go to the Portland Parks & Recreation website to download the form.

Do you know of a tree you think deserves to be recognized and protected as a Heritage Tree? Go to the Portland Parks & Recreation website to download the form.