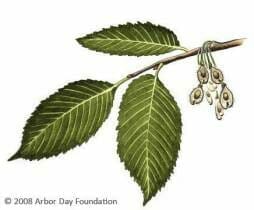 This disease has devastated magnificent elms with their beautiful, spreading canopies throughout the US. Anyone that loves and appreciates their community and the urban forests we live in; should take a moment to read further and learn how to detect and prevent DED.

Susceptible Elm varieties are the native ‘American Elm’ and introduced ‘European Elm’. There are several American elm varieties and hybrid varieties of Elm that are resistant to the disease. If you don’t know what kind of Elm (or tree) you have on your property or in your neighborhood, an Arborist consultation is a great way to identify and prevent more losses of these beautiful trees. The picture below shows an American elm leaf structure and seedpods, a very simple baseline for identifying an Elm tree.

DED is commonly detected in spring/early summer, after leaves on the tree have emerged. Elms infected with DED will have leaves on upper branches that curl. These curling leaves will decline, eventually turning brown. This leaf cluster die back is commonly referred to as ‘flagging’ in the arborist community. Another sign of DED is the presence of brown streaks in the wood, beneath the bark of braches affected. If DED is suspected, it is best to have an Arborist come out to inspect the tree and have samples sent in to a laboratory, such as a local extension office, for testing and confirmation of a diseased Elm.

DED has been prevalent since the 1920’s and since then, many resistant species have been produced to be resistant to the disease.  However, if you still have a remaining American or European Elm, there are ways to mitigate the disease. Pruning of ‘flagging’ limbs may help to limit the spread of DED in an affected tree. Proper pruning should only take place in the winter, when trees are dormant, to reduce the risk of further infection. By removing deadwood and broken limbs within the canopy, sites for beetles to breed and inhibit are reduced. By identifying DED early on and pruning out ‘flagging’ limbs, it increases the success rate of saving an Elm affected by DED. Along with proper pruning and removal of infected branches, several fungicides have also been very successful protecting Elms. Having an Arborist set-up and implement an effective fungicide regime can make a big difference in preserving your tree and having it around for more generations to come. These fungicides help control the beetle populations and spread of DED.

If you have an Elm that has been killed or affected by DED, another important note is the proper disposal of material. All brush/wood that can be chipped should be. Other methods of disposal are burning, burying, and de-barking. Tree material infected with DED should not be transported, as it can spread the disease to areas not affected by DED. By eliminating vectors for the beetles to breed, DED can be reduced. For reference, a 22”x4” log that has not been disposed of properly, can produced up to 1,800 beetles. Imagine what a whole dead tree could produce!

DED has been a long, uphill battle for many years. With better education, community support and mitigation techniques, we hope the magnificent specimens that remain can be saved and enjoyed by generations to come.