Rachel Carson’s 1962 landmark work Silent Spring spurred a whole generation to take action against DDT pesticides. In that book, Carson showed how careless, widespread pesticide use killed insects and the species that ate them, including many songbirds. Carson also connected pesticides to many cancers. Today, millions of bees die each year. While their demise is still puzzling, many scientists believe a new class of pesticides, neonicotinoids, is driving the bee holocaust. 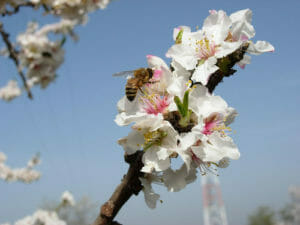 The Declining Health of Pollinators
Since 2006, beekeepers have reported massive bee die-offs, formally termed Colony Collapse Disorder (CCD). For the last decade, many beekeepers report losing 30% or more of their hive populations annually. The winter of 2012 was especially harmful for bees; many keepers lost 40%-50% of their hives. While a federal report found that fewer bee deaths occurred in the winter of 2013 compared to the previous winter, the overall picture for bee health is still grim.

How Declining Pollinator Health Impacts Trees and Agriculture in General
Bees are one of the globe’s top pollinators. According to the USDA, one third of all American agriculture is dependent on pollination, and certain crops are heavily dependent on bees in particular. Without bees around to pollinate, we could be facing a serious food shortage (not to mention an ugly planet).

Many trees depend on pollinators to take pollen from one blossom to another, thereby transferring genetic material. While some trees can self-pollinate, many cannot. Apples, pears, almonds, and dozens of other crops require cross-pollination to produce fruit.

During spring blooms, orchards depend on bees and other pollinators to facilitate pollen distribution, which is a precursor to fruit development. Without adequate pollination, fruit may be tiny, deformed, and sluggish to ripen, if present at all. To date, only the most pollinator-dependent crops have suffered damage due to bee shortages. In 2012, for instance, California’s almond farmers scrambled to find the 1.6 million bee colonies needed to pollinate the state’s 800,000 acres of almond orchards.

Recently, over 100 businesses sent a letter to the White House calling for the EPA to suspend neonicotinoids, a type of pesticides that more than 30 studies have linked to bee death. Neonicotinoids, or “neonics,” are the most commonly used pesticides across the globe. As research has revealed, neonics cause short- and long-term memory loss in bees; they can even cause bees to forget what food smells like. These businesses, many of which are food manufacturers, wrote to express their deep concern “about the continued and unsustainable loss of bees and other essential pollinator populations.” The letter continues to explain, “Bee losses have a ripple effect across the entire economy, and in many cases, affect our bottom line.”

Scientists are quick to highlight the fact that these bee deaths likely have multiple causes, including bee pathogens and mites. However, some etymologists have hypothesized that neonics weaken bees’ immune systems, allowing diseases to take root.

Europe has already banned neonics, and some American cities are following suit. Last February, Eugene became the first city in the nation to ban the use of neonicotinoids. Spokane has also banned the pesticides. The National Fish and Wildlife Service is phasing out neonic use in its parks. Lastly, the Oregon Department of Agriculture has put temporary restrictions on the use of certain neonicotinoid chemicals. As tree lovers, we believe more awareness is required to protect pollinators across the country.

How you Can Help Protect Pollinators
—Always select the least toxic pesticide. The Portland arborists at Urban Forest Pros can help you decide on which pesticide will do the least amount of harm while still shielding your trees from pests.
—Advocate for bee health by talking to friends and family about this important topic. For instance, while chatting about a recent order for tree service, Portland homeowners can mention their love for bees, and the connections between bee health and neonic pesticides.
—Sign up for volunteer opportunities to help spread the word and to provide homes for bees. The Portland-based non-profit Xerces Society has excellent resources for concerned citizens.
–Vote for politicians who have made pollinator health a top priority.
–Plant trees that attract honeybees, such as maples, oaks, sumacs, and California laurels.
–Consider keeping bees yourself. Portland is home to dozens of bee events, non-profits, and commercial bee keeping supply companies.

To learn about which bee-attracting trees would be appropriate for your yard, give us a call. We would be delighted to provide information on which species would thrive in your location.