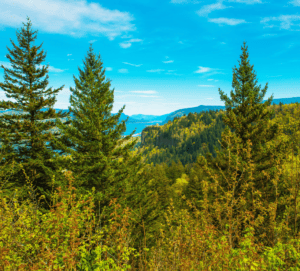 For one particular ponderosa pine in Oregon, size does matter.

Located near Grants Pass in the Rogue River-Siskiyou National Forest, “Phalanx” is the tallest known pine tree in the world, regardless of species. Measured in 2011, the tree set the mark at 268.3 feet and also has the third-biggest diameter at 17 feet, 11 inches.

About 120 miles away (as the crow flies), the world’s largest sugar pine resides, standing at 255 feet. So, for all of you young trees out there, if you want to rank amongst the world’s best and tallest pines, it may be time to pick up roots and move to Western Oregon.

While the Phalanx may grab the headlines as an incredible Oregon pine tree, there are a great variety of types of pine trees growing throughout Oregon State, from the Pacific Ocean to the Rocky Mountains. However, many of these trees are generally confined to the higher elevations, anywhere from 2,300 feet to 9,000 feet above sea level.

Oregon Pine Tree Characteristics According To A Leading Arborist

There are many characteristics involved in Oregon pine tree identification. Here’s how to identify different Oregon pine trees. The bark of the pine tree can vary from tree to tree. For example, the ponderosa bark is yellow or orange and can break off in jigsaw puzzle pieces where the whitebark pine has a grayish hue. (Whitebark just sounds better than grayishbark, though). Some pines reach hundreds of feet in the air, others barely top out at 50 feet.

However, every type of pine tree has needles and similar fruits (pine cones). Which can cause some confusion for casual observers who may confuse fir trees with pines. Adding to the confusion is the Douglas Fir, the most populous tree in Oregon. Is it a fir? A pine? A spruce?

Although it goes by other names, such as red fir, Oregon pine, and Douglas spruce, the answers are no, no, and no. A Douglas Fir is actually a type of hemlock tree, and a false hemlock at that. At least, that’s what part of its genus name (Pseudotsuga menziesii) means. All three trees are the same class of conifer, though: Pinopsida.

So What Are the Differences in Types of Conifer Trees in Oregon? 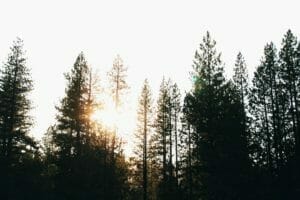 Oregon State has over 30 different conifer tree species, we’ll concentrate on the differences between firs, spruces, and pines. The first and maybe most reliable way to spot a spruce is to look at their needles. Where other conifers group their needles in two, three, or five needles, spruce needles are a singular group.

Spruce cones also differ when it comes to their cones. Pinecones are very rigid and can be prickly whereas spruce cones are more flexible. The least reliable way to pick out a spruce tree is the bark, which can differ in a variety of ways.

True firs are similar to spruces when it comes to needles, featuring single needles attached to the branch. However, where spruce tree needles are brittle to the touch, fir needles are much more pliable. The branches themselves are very dense, making them popular as Christmas trees (noble, Douglas, and grand firs being popular choices).

Fir cones are very different than the other two, growing at the top of the trees before falling apart on their way down. If a cone does make it to the ground intact, they are usually green an oozing sap. Fir bark also differs from the pine, featuring a smooth surface that may peel off. As we’ll discover below, pine tree bark is often very rough and flakes off.

Now that we’ve outlined the characteristics of an Oregon pine tree, let’s take a look at a few of the different types of pine trees found in Oregon. We’ll start with the king of all pines thanks to Phalanx, the ponderosa.

PONDEROSA PINE
The needles of the ponderosa can grow up to 10 inches long and mostly occur in bundles of three. Finding bundles of two is rare, although not unheard of. The cones are oval-shaped and can reach three to five inches in length with stiff prickles that stick out for scales.

As mentioned above, the bark on older trees is yellow-orange and flakes off in odd shapes. Ponderosas can reach heights of over 200 feet (obviously), but a more common growth range is between 60 and 130 feet.

Where to find these pine trees in Oregon: Ranging from the coastal range to the Rocky Mountains, ponderosas grow from sea level to an elevation of 9,000 feet. 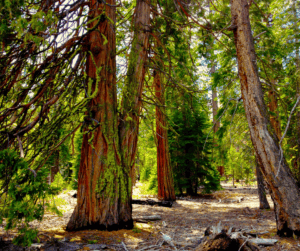 SUGAR PINE
Coming in bundles of five, the sugar pine needs are three-sided and grow to five inches. Each side of the needle has a white line running the length of the needle. The cones are the largest featured here, sometimes reaching 20 inches in length with thick, straight scales.

The bark is reddish-brown, rutted, and breaks off in long pieces. The sugar is actually the largest of the pine trees (the Phalanx notwithstanding), with heights normally reaching anywhere from 130 to 190 feet.

Where to find these pine trees in Oregon: Southern Oregon ranges at elevations ranging from 2,300 to 9,200 feet.

WESTERN WHITE PINE
Western white needles are three-sided, come in bundles of five, and grow between two and four inches long. One oddity of the needle is just two of the sides have white lines. The cones of the western white are slender, curved, and can grow to a foot long with scales the peel out at the top.

Smooth when young, the bark is segmented into squares or rectangles as they age and is very dark. These trees usually grow to 100 to 160 feet, although it’s not uncommon to reach well past 200 feet.

Where to find these pine trees in Oregon: Growing from southern British Columbia to the Sierra Nevadas in Calfornia, white pines are found from sea level to 2,500 feet. 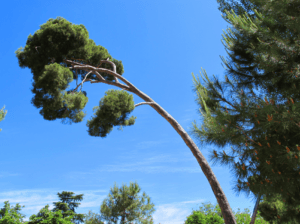 LODGEPOLE PINE
These pines feature twisted needles up to three inches long and bundled in threes. The cones are squat, two inches long, and have poky scales that flay away from the center. They may also stay closed for up to three years.

The bark is quite flaky due to its thin nature and dark in color. Lodgepole pines commonly reach heights of 70 feet.

Where to find these pine trees in Oregon: Lodgepoles appear at higher elevations (around 11,500 feet) but also appear along the Pacific coast, sometimes referred to as shore pines.

JEFFREY PINE
Clustered to give the tree a bushy appearance, the Jeffrey needles come in bundles of three off the branch and can grow to 10 inches long. The cones can reach a foot in length, but after opening, the scales actually curve inward.

Similar to the ponderosa, the bark flakes of in odd shapes and sizes, but is a darker reddish-brown in color. Jeffries grow between 170 and 200 feet in height and live for 500 years.

Where to find these pine trees in Oregon: In mountainous, southern regions of Oregon, anywhere from 4,800 to 9,600 feet in elevation.

LIMBER PINES
Occurring in groups of five, the limber needles can be up to three inches long and have white lines on all surfaces. The cones can remain closed for several years, reach lengths of seven inches, and have scales that are broad but not spiky.

Grayish-brown in appearance with furrows and rough to the touch, the limber pine tops out 50 feet in most cases. Along with the whitebark pine, the limber pine is one of the shortest pines in Oregon and has a shrub-like appearance.

Where to find these pine trees in Oregon: Preferring dry, rocky, and higher elevations, limber pines are found in the northeastern corner of the state between 7,700 and 11,500 feet. 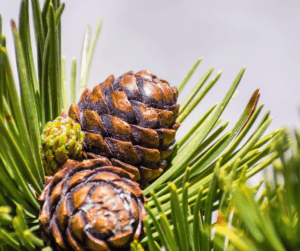 WHITEBARK PINE
There are white lines on the whitebark needles, which are bundled in groups of five and grow to three inches long. The cones are interesting in that even in maturity, they don’t open. They grow to around three inches in length, are relatively round, and provide a nutritious snack for woodland animals.

The bark is thin, scaly, and grayish throughout its lifespan. Usually growing to just 50 feet, whitebark pines have a similar distorted look of the limber.

Where to find these pine trees in Oregon: Reach higher elevations than most other pines, whitebarks can be found near the timberline from 7,700 to 12,000 feet in the high mountains of western Oregon.

Whether you want to gaze upon a world-record holder, or need cones for a Christmas arts and crafts project, pine trees definitely offer Oregon a different texture when it comes to the canopy. They also help make up one of the best things about the Pacific Northwest: a wide variety of trees that lend shelter to animals and a beautiful landscape for humans.

If you are looking to hire a professional tree expert to check out the health of your Oregon pine tree, or any tree on your property for that matter our top certified arborists at Urban Forest Pro have you covered. We are happy to provide you a free estimate for the price of your tree project throughout the Oregon area so you have an idea of what your project will encompass. Our top-rated arborists are experienced in the field and come licensed, bonded, and insured and we are glad to answer any questions you have regarding your specific project.

Our leading arborists serve the Portland Metro area as well as Vancouver, WA and its surrounding areas. Contact us today to find out more information about the tree removal process.

What Our Clients Say About Us

“Superb customer service throughout the process. From the free initial consultation, to scheduling, to the day of. Dalton and Shaden did a fantastic job pruning and cabling my sugar pine that was split at the base. Super friendly and explained all the work being done. I would highly recommend.”